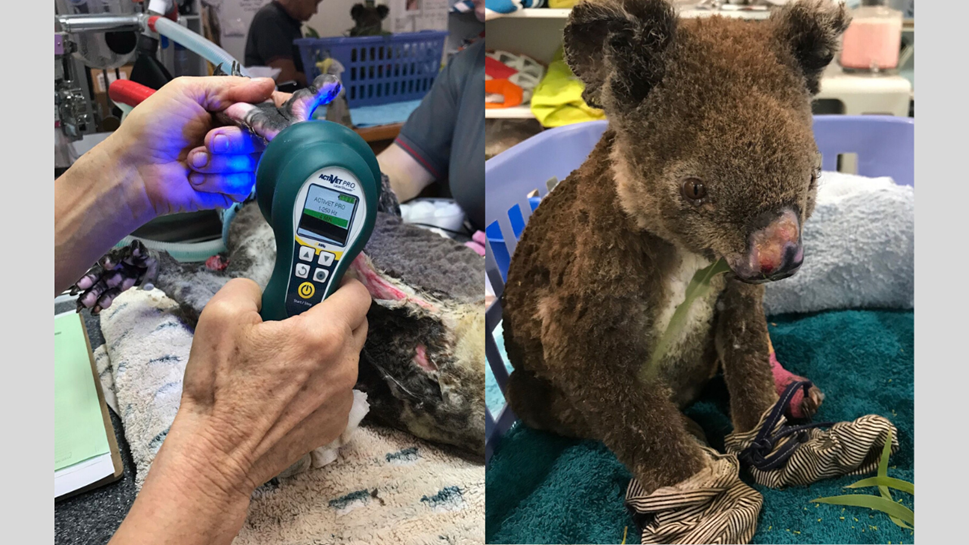 This story originally appeared as an Education Center feature in Veterinary Practice News.

Veterinarians routinely see traumatic injuries, but nothing prepared them for what is happening in Australia. Devastation from the fires has shattered all previous records. As of this writing, 30 people have died, between 500 million and one billion animals are dead, and 15.6 million acres of bush, forest, and parks are still burning primarily in the states of New South Wales and Victoria, according to the New York Times.

In hardest-hit New South Wales, fire has destroyed more than 2,000 houses, forcing thousands to seek shelter elsewhere. Over one hundred fires are still burning. Tens of thousands of farm animals, mainly sheep and cows, have also been killed in the fire. At the Adelaide Koala Rescue, 110 rescued koalas are accommodated in makeshift cribs.

Unique habitats like South Australia’s Kangaroo Island have not been spared and authorities are very concerned numerous species are going to become functionally extinct. Under the best of circumstances, koalas cannot move quickly and instinctively climb to treetops, making them especially vulnerable to crown fires.

There are other complications. Health-care facilities of all kinds are overwhelmed, including wildlife rescue and rehab facilities. The Koala Hospital in Port Macquarie normally has three or four koalas under its care. With 60 koala patients, it is now at capacity. However, residents in the area continue to find koalas in charred trees and half-buried in ash—too badly injured to move—and are taking them to the nearest facility.

Rising to the challenge

There’s hope for a few, however, thanks to dedicated veterinary staffs across the country that are working day and night, trying to keep up supply lines, and utilizing every resource at hand to save as many fresh eucalyptus leaves as possible for Australia’s unique and iconic koalas.

But the sheer volume of cases makes this an enormous challenge for wildlife veterinarians. Fortunately, two representatives of REM Systems, a veterinary equipment distributor in Australia, saw the news coverage and were able to get to the scene at Port Macquarie Koala Hospital last November where veterinarians are fighting every hour to save as many animals’ lives as possible. 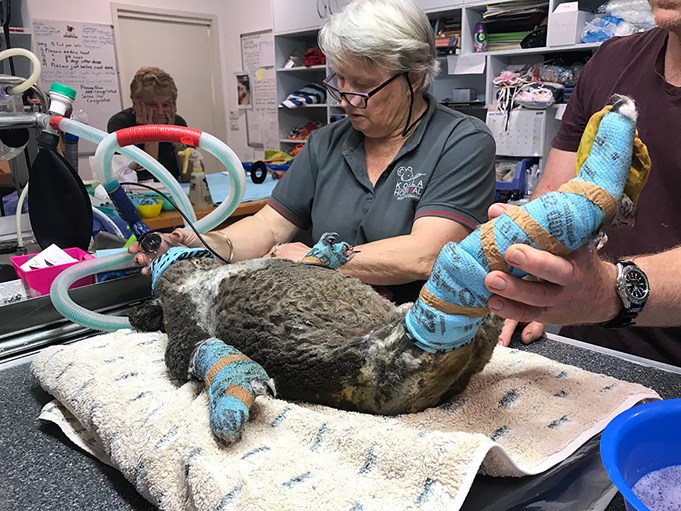 REM Systems’ veterinary territory manager, Simone Taylor, and her colleague, Matt Jones, DVM, the company’s technical and operations manager, spoke to the clinical director and offered to make available a special Super Pulsed Laser from Multi Radiance Medical that would help accelerate healing of burns and provide koalas relief from the intense pain. The hospital staff was trained, and results were noticed immediately. Wounds were healing faster, and the koalas were more comfortable with less pain. As a consequence, hospital director Cheyne Flanagan added the laser to the regular treatment regimen.

Taylor and Dr. Jones recently returned to the Port Macquarie Koala Hospital for a progress update on the injured animals. “Time is of the essence when managing wounds in koalas, since they need to be anesthetized to administer treatment and the MR4 ACTIVet PRO LaserShower allows effective therapy in a short time window,” Dr. Jones said.

Staff members at the facility reported great improvement with wound healing through the use of this Super Pulsed Laser therapy. Additionally, they were impressed and appreciative of the laser’s ease of use. “We’ve had a lot of burn cases over the years and I really think it did speed up the healing process, and that’s why we decided to buy one,” Flanagan remarked.

Super Pulsed Laser therapy is making a big difference with wounds, pain relief, and other conditions in thousands of clinics around the world. Unlike high-intensity class IV lasers, which would not be indicated for burn patients, this more advanced laser technology utilizes extremely high speed (20 to 200 nanosecond) pulses, which eliminate thermal overloading in tissue and deliver beneficial high-density photons to the target tissues. 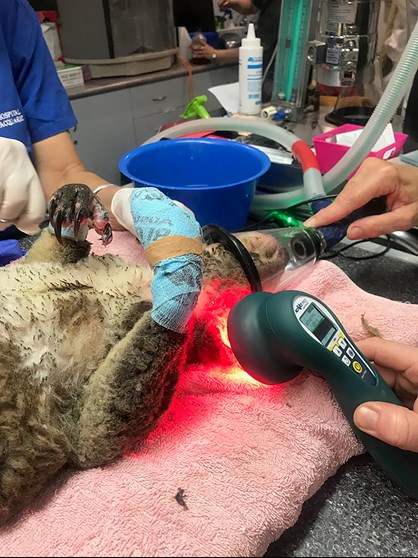 The MR4 ACTIVet PRO LaserShower, with synergistic wavelengths, is more efficacious than single wavelengths, while nonthermal effects of low-energy lasers are beneficial to tissue regeneration. The red and blue wavelengths have low penetration and high absorption for treating superficial targets, whereas near-infrared has high penetration and low absorption to treat deeper target tissues. The blue wavelength effectively fights infection by causing oxidative stress to bacteria. The antimicrobial properties of the blue wavelength are similar to ultraviolet light, without the associated risks. This promotes faster wound healing and infection control, reducing the use of antibiotics.

With the MR4 ACTIVet PRO LaserShower, all these effects are accomplished with the same device.

The story of the Port Macquarie Koala Hospital’s rescue efforts has gone viral—the hospital has been featured in a video from Yahoo! Australia that has garnered millions of views since its release in December, prompting a huge outpouring of support from all corners of the Earth. The hospital started a GoFundMe on Oct. 31, 2019, before the video’s release, with an initial ask of $25,000. The campaign has raised more than $7 million at the time of this writing.

Regardless of the way the world has responded to this crisis in Australia, all of the money raised and more will be needed because the much greater challenge will be to give these animals a habitat to which they can be returned. For years to come, there will be no eucalyptus forests to feed the koalas in the hardest-hit areas. It will take enormous effort to control opportunistic invasive species that can very quickly take over large areas of land and prevent the original ecosystem from returning. Once-rich soil in the rain forests has also been burned, destroying its nutrients. If there’s to be a recovery, the world will need to stay engaged—the veterinary community globally can make an enormous difference.

It will take decades to get the environment, wildlife, and communities back to what they were before the devastating bushfires. But the stories of strength and survival give hope to those directly affected and those watching from afar. Please consider donating to the Port Macquarie Koala Hospital and other Australian organizations to help them continue to rebuild and recover.

Multi Radiance Medical supports veterinarians and their staff who dedicate their lives to healing and reducing suffering in animals worldwide. We are humbled by and grateful for the opportunity to provide our own support in your efforts.

Mark Strong is the global director of business development for Multi Radiance. He founded the veterinary division in 2010 and loves helping veterinarians around the world, especially those in the most remote locations using this technology. To reach him or REM Systems, please Contact Us.