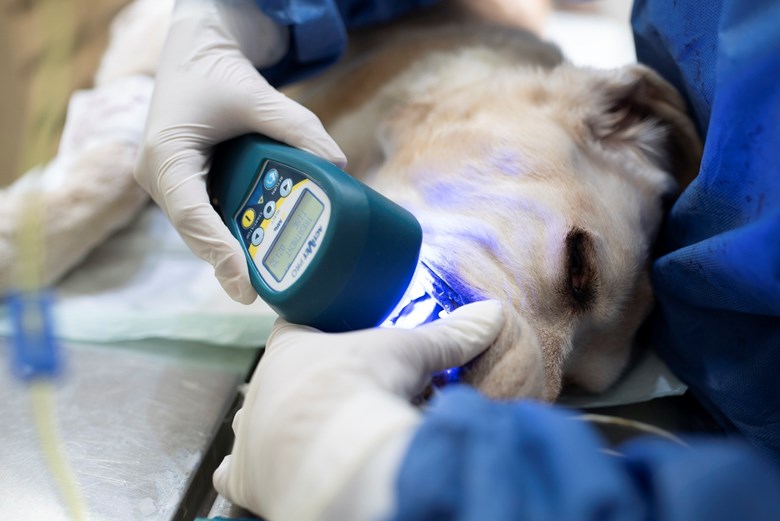 This article originally appeared in the November 2020 issue of Veterinary Practice News.

Medical technology evolves rapidly, and veterinarians are constantly looking for new tools that can offer better outcomes to patients. As more studies are published every month, super-pulsed laser therapy is being established as part of the gold standard treatment for acute painful inflammatory conditions, such as otitis, pyotraumatic dermatitis, wounds, abscesses, and postoperative procedures, to help decrease pain and speed incisional healing. Initially used mainly in rehabilitation settings, super-pulsed laser therapy is now being adopted for new and emerging disease states and conditions seen in general veterinary practice. One new area of particular interest is blue light therapy’s effectiveness in killing harmful bacteria that cause gingivitis and periodontal disease, helping restore the oral biome to a healthy, balanced state.

Advances in lasers and light-emitting diodes (LEDs) allow for the addition of new features to make devices more powerful and efficient. Multi Radiance Super Pulsed Laser Therapy includes a blue wavelength, 465 nm in the ACTIVet PRO and 470 nm in the ACTIVet PRO LaserShower, which increases photon density to kill pathogens and is especially powerful for dental conditions in veterinary medicine.

Researchers at the Harvard University School of Dental Medicine-affiliated Forsyth Institute discovered by accident that blue light kills bacteria that are the prime cause of periodontal disease. J. Max Goodson, the institute’s clinical director, reported in Harvard Magazine, “Much to our surprise, rather than an irritating effect, we actually found a diminution of inflammation.”1

Several species of bacteria that cause periodontal disease—known as black-pigmented bacteria (BPB)—transport hemoglobin into their bodies as an iron source (this is thought to be why they make gums bleed, by using enzymes that weaken blood vessels), and store the hemoglobin’s dark-colored, photosensitive porphyrin. Light directed at these bacteria is absorbed by the porphyrin and, through a chemical reaction, produces substances that are toxic within the bacterial cell.

Nikolaos S. Soukos, director of the Forsyth Institute’s applied molecular photomedicine lab, tested the finding using the blue light alone. His results, reported in Antimicrobial Agents and Chemotherapy, showed that in the mouths of control-group members who were told they were receiving light therapy, black-pigmented bacteria constituted six percent of all oral bacteria. In the mouths of people who received the blue-light treatment, just one percent of the bacteria were black-pigmented.

The researcher’s goal was not to banish all bacteria from the mouth, but to get rid of the most harmful types and restoring “balance and harmony in dental plaque.” Goodson and Soukos also experimented with other colors of light and found that blue worked best.2 Further, of the 700 species of bacteria that live in human mouths around the world, blue light in the range of 380 to 520 nm works only on the black-pigmented group—those responsible for onset gingivitis leading to periodontal disease.3

BPB is common to both canines and humans, as cited in Pigmented-Anaerobic Bacteria Associated with Canine Periodontitis, Hardham J, Dreier K, Wong J, Sfintescu C, Evans RT. Porphyromonas gingivalis, a black-pigmented anaerobic bacteria (BPAB), has been implicated as the primary periopathogen. It has been demonstrated that BPAB are also found in companion animal periodontal pockets. Porphyromonas salivosa, Porphyromonas denticanis (a novel species), and Porphyromonas gulae were found to be the most frequently isolated BPAB associated with canine periodontitis. 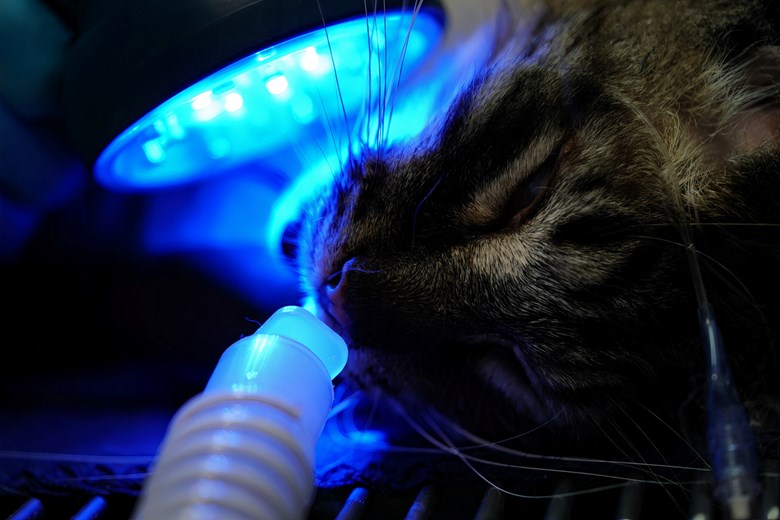 What this means for veterinarians

This research has significant implications for veterinarians, since by two years of age, 80 percent of dogs and 70 percent of cats have some form of periodontal disease according to Today’s Veterinary Practice.

Many veterinarians use broad spectrum antibiotics in their dental care, but they are running out of effective weapons to counter drug-resistant bacteria. This is exacerbated by pet owners’ failures to finish entire prescriptions due to side effects or forgetfulness, which allows surviving bacteria to grow in number and in strength, leading to more resistance.

It is highly unlikely BPB will develop resistance to blue light. The antimicrobial effect of the blue light is a photochemical reaction that produces cytotoxic events within the bacteria. Blue light with the right wavelengths is shown to produce phototoxicity and oxidative stress selectively to BPB, significantly reducing the load with short duration treatments of one to three minutes following dentals or other oral interventions. Hermann von Tappeiner et al.4 reported the observed toxic effect in the presence of the light was not attributed to heat.

Implementing blue light in your treatment regimen can result in increased visits. This therapy is best applied on a regular basis depending on severity at time of diagnosis and as a prophylactic to help prevent occurrence and reoccurrence. This also lessens dependency on drug-resistant and side effect-producing drugs.

Developed and improved over the last 40 years, laser therapy reached its current status as a fundamental modality in veterinary practices only in the last five years. In contrast to delivering wavelengths designed to promote healing, attention turned to those that can selectively destroy bacteria.

In addition to providing pain-relieving laser therapy, Multi Radiance devices also include high-intensity blue LEDs for effective blue light therapy. Treatments with the handheld, cordless lasers are easy to administer, clinically proven safe, and take only minutes at a time. 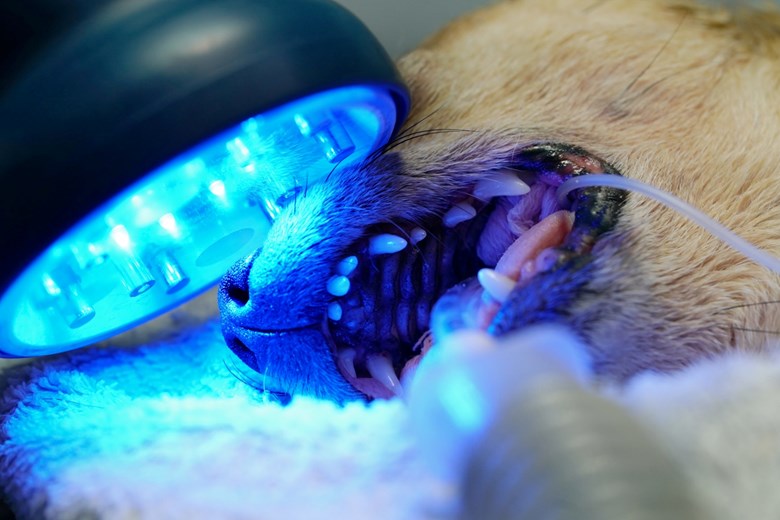 Marlene Siegel, DVM, owner of Pasco Veterinary Medical Center in Lutz, Fla., uses blue light daily on almost all her clients. In one case, an eight-year-old English cocker spaniel presented for a neuter and dental. To treat the dog’s moderate tartar and gingivitis, the blue light took only minutes to apply with a scan while the dog was anesthetized for the neuter procedure.

“I love that the blue light is a natural antibacterial,” Dr. Siegel said. “It’s easy maintenance for dentals in all my clients and it aligns perfectly with other holistic modalities we use.”

For Gabriel Ontiveros Jimenez, MVZ, Ing., laser therapy and blue light is used on all clients at Lomont Hospitals in Mexico, of which he is the founder and managing director. Not only is the laser device beneficial for pain and recovery, but adding in the blue light is especially convenient for dental work.

“The blue light wavelength has helped us significantly reduce the black-pigmented bacteria population that causes gingivitis and periodontal disease,” Dr. Ontiveros said. “The use of blue light for these conditions is now standard protocol in our hospitals.”

Iker Asteinza, DVM, owner of Animal Home Veterinary Hospitals in Mexico, has also adopted blue light into everyday practice, especially with dental scaling, extractions, and general oral procedures. “With the blue light, we notice pets making a faster recovery with less pain, plus it is an added value that works as a differentiator from other veterinary practices,” he said.

Gingivitis and periodontal disease are the most common conditions needing treatment at companion animal practices. Without adequate veterinary care, the majority of young dogs and cats will be negatively impacted by dental issues, thus regular dental care is becoming increasingly recognized as essential. And as drug resistance issues only get worse with the most harmful bacteria, veterinarians and pet owners alike are looking for new treatment modalities supported by solid science that can provide quick, safe, and effective results.

Give your patients the safe, side effect-free alternative to drugs and make blue light therapy a part of your regular veterinary dental care.

Learn more about how Multi Radiance's family of therapy lasers provide treatment options for every stage in the Continuum of Care, from relieving pain to tissue repair to long-term care.

Mark Strong is the global director of business development for Multi Radiance. It’s my great privilege supporting veterinarians around the world with a balance of evidence and outcomes delivered safely. Laser therapy is becoming recognized as a foundational modality for the smallest to largest practices.

For a full bibliography or to reach the author and contributors, please Contact Us.