Highlighting the Healers in a World of Hurts: Multi Radiance Salutes Wildlife Veterinarians Who Sacrifice Modern Comforts for Exotic Animals in Need

This article originally appeared in the August 2019 issue of Veterinary Practice News magazine.

Every day, news feeds and social media alert us to graphic images showing animals all over the world suffering from neglect and abuse. For most of us, the best we could do is maybe making a donation when we see that a credible non-profit group is involved. But for some, seeing animals in need is an irresistible call to action.

Wildlife veterinarians travel to the farthest edges of civilization, sometimes working under dire conditions and risking life and limb, because it’s a calling felt since childhood; they want to be healers in a world of hurts.

In these remote areas, most of the technologies we take for granted at traditional vet practices like digital x-ray, blood analysis machines, and surgery suites with recovery rooms are nowhere to be found. Typical patients aren’t just dogs and cats with aches, pains, and other common injuries; these wildlife vets are often tasked with treating unfamiliar native species of all sizes with severe injuries and traumatic wounds that require immediate attention and the best care possible to get animals back on their feet and into the wild.

When working with limited resources in remote areas, equipment triage is the order of the day, every day. Vets need treatment modalities that produce quick, reliable and, above all, safe patient outcomes for a variety of conditions. Durability and portability are paramount when using equipment far from basecamp in all sorts of temperatures, climates and altitudes.

From treating gentle giant elephants to the fastest cheetahs, the wildlife veterinary professionals profiled here have overcome some of the limitations in the field with help from a novel modality that allows for fast, painless healing anywhere and anytime: Multi Radiance Super Pulsed Laser Therapy.

Erica Ward, DVM, started her career as wildlife vet at Thailand’s Elephant Nature Park (ENP). Like other animal rescue and rehabilitation centers, Ward and her team had extremely limited access to medical supplies for the elephants, dogs, cats, monkeys, water buffalo and a few birds that found refuge at ENP. But the park’s population grew rapidly and soon was accommodating over 1,000 animals. One of the tools Ward found to be most useful for her patients was a new cordless therapeutic laser: the ACTIVet.

Ward found laser therapy especially good for healing acute wounds, and helping with pain and inflammation for senior animals with chronic arthritis and other musculoskeletal conditions. The rescued elephants often came with abscesses from sleeping on pavement after a life of forced street begging, while others had wounds from rough play with other elephants. “Anything we can do that will help speed up healing and get these elephants back in action and able to enjoy their retirement is a plus. That’s where this Class 1 laser was a big help,” Ward said.

After 3 years at ENP, Ward joined non-profit Loop Abroad, a study abroad program for high school and college students interested in pursuing veterinary careers outside the U.S. She continues to work with numerous elephant rescue centers throughout Thailand, and her work has taken her to South Africa where she treated a tooth abscess on a cheetah. “The laser helped relieve pain and mature the abscess faster. We also used it post-extraction for a faster recovery,” she said. 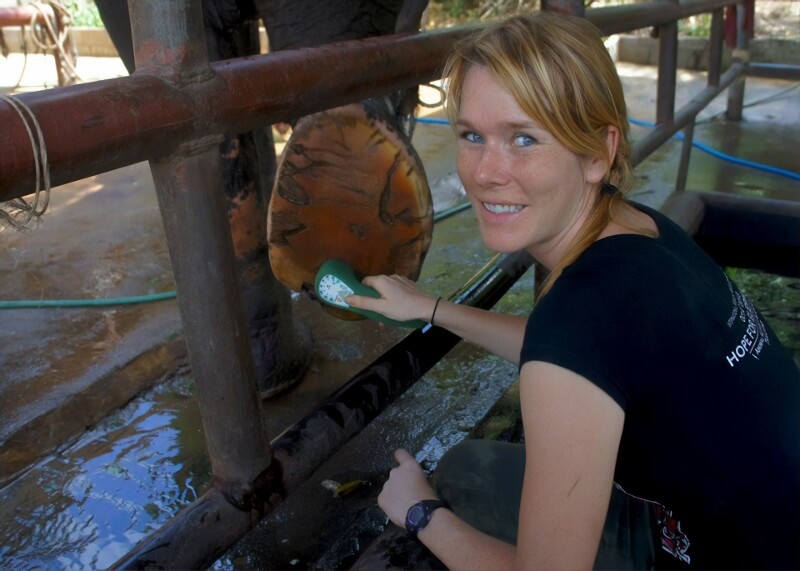 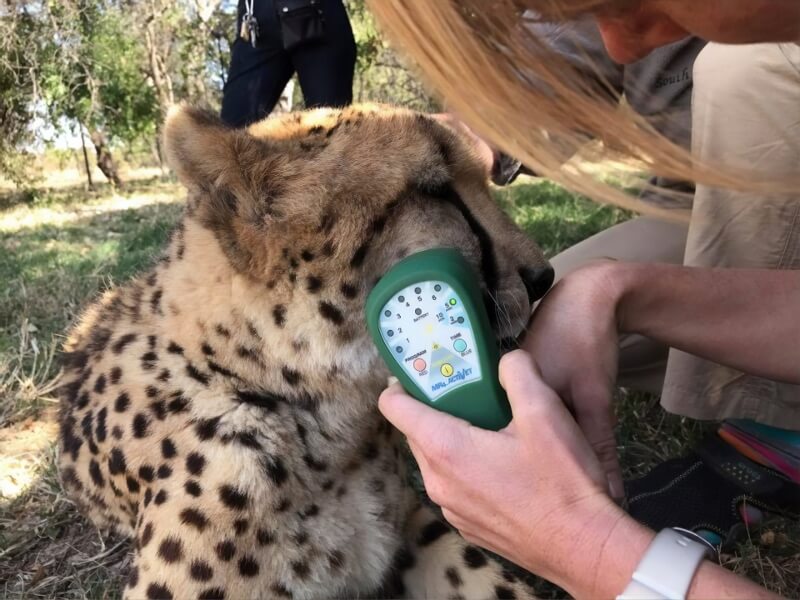 Trish London, DVM, CVA, and one of Dr. Ward’s good friends, has worked alongside other wildlife veterinarians in India, Thailand, Cambodia, Laos, Vietnam and Sri Lanka. Now she is stationed in the small village of Sauraha, Nepal, where she works with non-profit Stand Up 4 Elephants caring for captive elephants that have spent their lives working jungle safaris, transporting tourists or helping with poacher patrols.

London is not exempt from the difficulties that come with caring for elephants in these remote parts of the world. So when Ward loaned one of the lasers she had, London was excited to put it to work for her own challenging elephant patients – and she had a special case in mind.

Sita Kali, known as Sita, is a blind, captive Asian elephant in her 40s who provided safari rides in Nepal for 3 years. Sita was knocked down by another elephant, leading to a series of additional injuries over the next 3 months including necrotic pressure wounds, edema, and a swollen carpus; she couldn’t stand on her own until she had a special sling and harness to keep her elevated.

London immediately started laser therapy treatments. Her laser has three synergistic laser and light wavelengths delivered at specific frequency settings to relieve pain, increase circulation, reduce inflammation and repair tissue. The laser’s blue wavelength is bactericidal and immediately started helping to heal the large wound on Sita’s hip. And because the laser is super pulsed, there was no risk of overheating tissue, unlike the Class IV lasers she had seen in traditional vet practices.

“Elephants are prone to be very slow healers, and I think this laser helped heal her wound more quickly and completely than we would have expected with traditional methods,” London said. 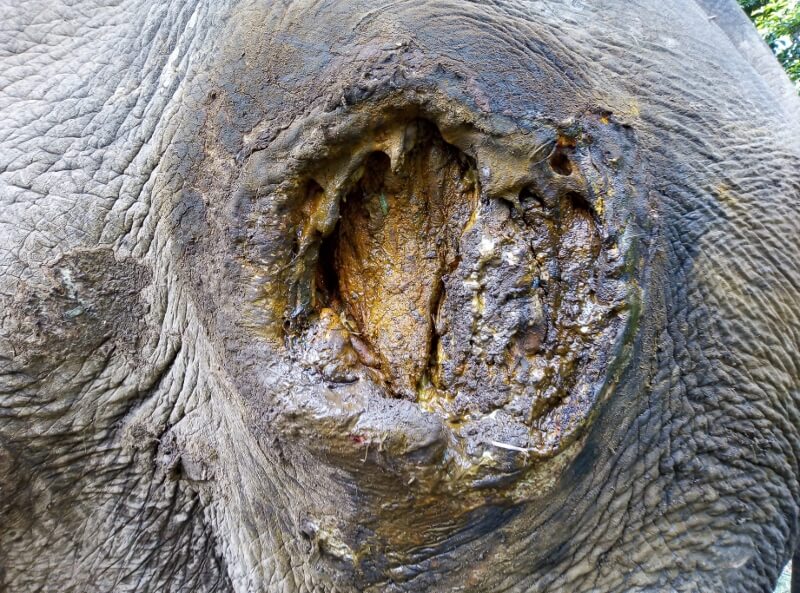 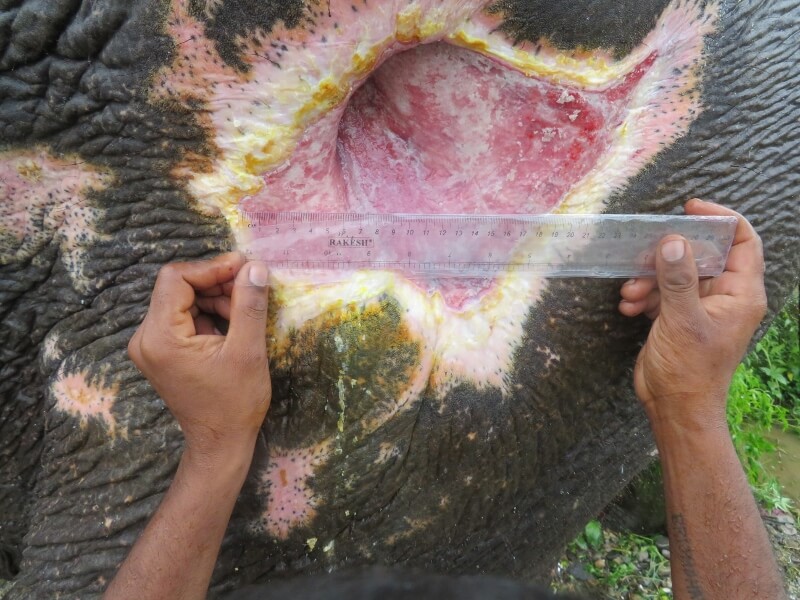 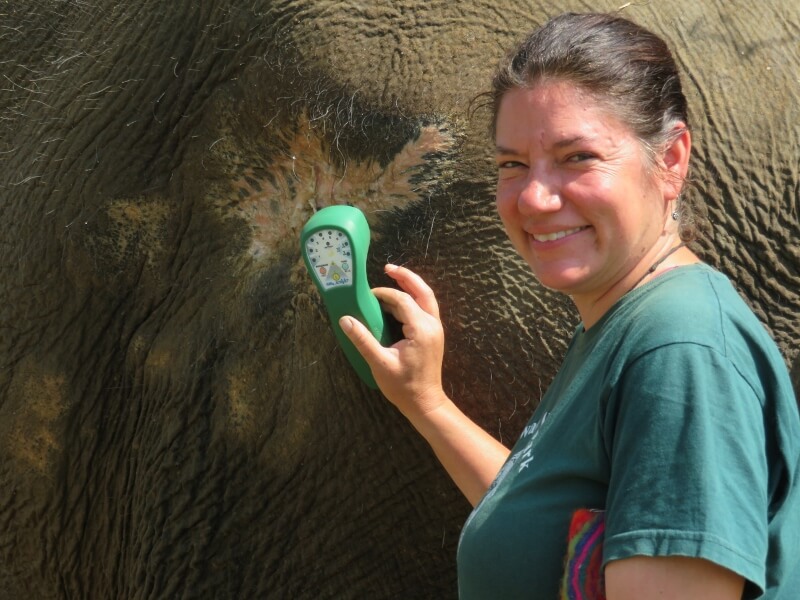 Rinku Gohain, DVM, originally from Assam, India, has tended to elephants in places like Thailand, the Netherlands, and the United States, to name a few. His passion for elephants led him to the Wildlife Trust of India, in a remote area of Aruncachal Pradesh.

During his 13 years of experience in elephant medicine, including as a veterinarian at ENP where he was introduced to this laser, Gohain has advocated for both the mental and physical well-being of wild and captive elephants. He uses positive reinforcement training and other behavioral techniques to gain trust of elephants that have not forgotten abuses they suffered from humans.

For elephants with serious trust issues – making them not readily compliant with most veterinary interventions – it made perfect sense to integrate laser therapy into his treatment regimen.  In early 2019, Gohain added the ACTIVet PRO, with double the peak power and more powerful blue light for infections. With positive reinforcement training from his good friend and elephant behavior expert, Chrissy Pratt, also from ENP, elephants were trained to present their feet or other body parts needing treatment.

“The elephants are very compliant with laser therapy because it’s non-invasive, they don’t feel any heat from it and they learn to associate it with pain relief,” Gohain said. “We’ve used the laser to treat several types of abscesses, bullet wounds and dental complications in the elephants and so far we’ve seen very positive results.” 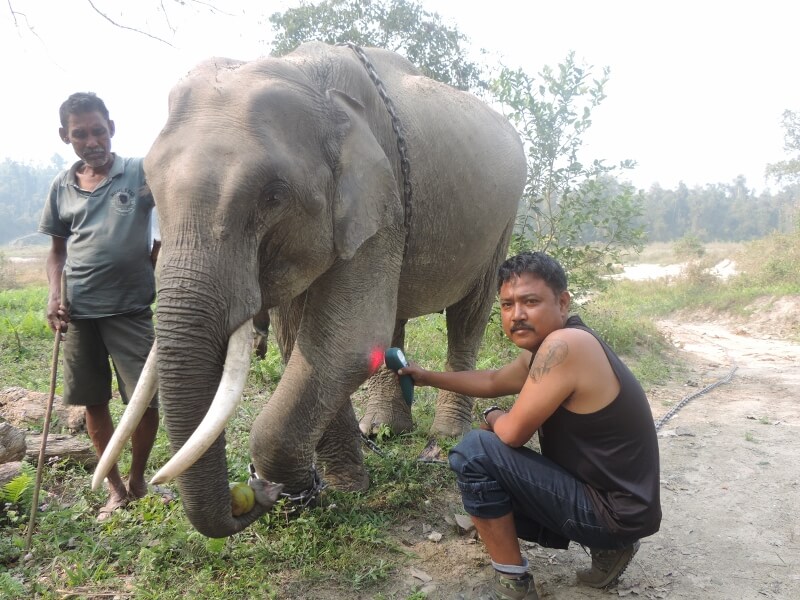 Jamie Vaughan began her animal rescue mission with one injured stray dog in Paro, Bhutan. More than a decade later, as founder of The Maya Foundation, Vaughan and her team always work hard to give each injured animal a second chance at life. But with 400 diverse animal patients, they, too, are limited with treatments they can provide because her 501(c)(3) also operates solely on donated funds and volunteers.

When a partially paralyzed mule named Agay arrived at the shelter in 2018 and his condition wasn’t improving, Vaughan was running out of options. Thanks to a donation, The Maya Foundation was able to purchase one of the same super pulsed lasers to see if Agay could regain mobility.

“He wasn’t responsive to any other treatments, it was honestly a last resort to save him. But it worked wonders for his mobility with just a couple of sessions,” Vaughan explained. “We knew this was going to be an invaluable tool for our patients to come.” 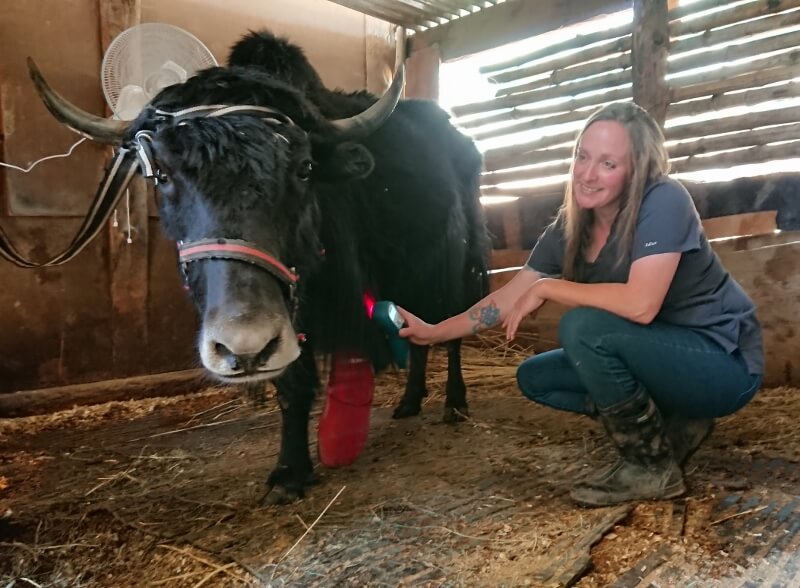 Vaughan now uses this laser therapy on nearly every severe injury. The Maya Foundation recently welcomed a pregnant yak with a stump wound from an amputation seven months prior that, without postoperative care, had never properly healed. To prepare the animal for prosthesis, Vaughan used the laser along the yak’s spine for relaxation and locally for tissue repair, along with the blue light to fight infection.

Vaughan says the laser is not only versatile, but a safer alternative to traditional medications. “We don’t always have comprehensive blood tests available for animals here, and with laser, we don’t have to worry about possible kidney, liver damage or other side effects from NSAIDs and corticosteroids,” she said.

Today’s most advanced lasers possess the ease of use, safety, versatility and portability that enable Elephant Nature Park, Loop Abroad, Stand Up 4 Elephants, Wildlife Trust of India, the Maya Foundation and countless other organizations to benefit all animals. Whether it’s healing elephants in the jungle or the beloved pets of your local community, veterinarians everywhere should be confident that with this laser, they can successfully treat patients anywhere, anytime.